As a young girl, Karen Peck attended the all night concert events in the Atlanta, GA area and dreamed of singing with the famous LeFevre Family when she grew up. Around 1979, she joined Uncle Alf And The LeFevres. The original LeFevres had changed their name to The Rex Nelon Singers in 1977. In 1981, she left Uncle Alf's group and joined Rex's. Over the next ten years, she sang her way into the hearts of fans. Karen then launched a mixed Southern Gospel group called Karen Peck And New River that included her sister Susan and her husband, Rickey Gooch.

Karen has written many Southern Gospel songs, including several that have been recorded by her group.

In 2011, she began an acting career with an appearance in Joyful Noise starring Dolly Parton and Queen Latifah. 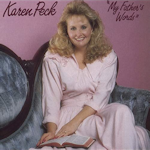 hi-res
1989 My Father's Words (Homeland Records/): Living In Beulah Land; My Father's Words; Through Mercy's Eyes; Tell Somebody Again; Just Want To Praise; Waiting To See What's Waiting For Me; I Will Give You Water; The Battle Isn't Over; The Victory Has Been Won; Amazing Grace. 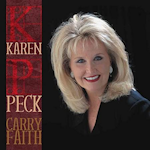 hi-res
1996 Carry Faith (Canyon Road Records): The House That Love Built; I'm Gonna Get In Shape; You've Got A Friend; Handful Of Dust; This Little One; When It Rains; John Saw A Lamb; Single Drop Of Rain; In The Potter's Hands; Only One, Only You.