Josh Garner sang lead for the Florida Boys from 1999-2007. He also sang with a part-time group called the Five Broke Single Boys from 2001-2004 and with the Blackwood Gospel Quartet. In 2010, Josh Garner along with John Rulapaugh formed a new southern gospel group called Freedom Trio. He left the group in 2013 to join the Dixie Melody Boys. Garner later sang tenor with the Chuck Wagon Gang. 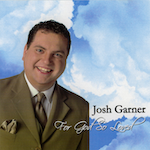 hi-res
2009 For God So Loved (Daystar Productions): I'm Forgiven; My God Is Real; I'm Gonna Be There; Declaration Of Dependence; Walkin' Like Abraham; Thy Will Be Done; For God So Loved; While The Ages Roll; Scars In The Hands Of Jesus; See Those Clouds; I Firmly Promise You; When He Was On The Cross (I Was On His Mind).
All articles are the property of SGHistory.com and should not be copied, stored or reproduced by any means without the express written permission of the editors of SGHistory.com.
Wikipedia contributors, this particularly includes you. Please do not copy our work and present it as your own.