Joe Moscheo is a Southern Gospel musician, songwriter and executive. He played piano for the Harmoneers, Prophets and the Imperials during the 1960s and early 1970s. Starting in 1978, he began a 16 year stint working for BMI, rising to the position of Vice President of Special Projects. In 1996, he launched the Entertainment/Music division of First Union Bank. In 2003, he joined the American division of MCS, an entertainment company based in London. He became president of their American operations the following year.

Moscheo passed away on January 11, 2016 after an extended illness. 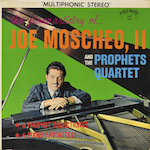 hi res
1964 The Piano Artistry Of Joe Moscheo, II And The Prophets Quartet (Sing Records/MFLP-3004): Wonderer (Medley); Then The Answer Came; An Empty Mansion; You Can Have Him; Close To The Master; After While; Just A Closer Walk With Thee; God Of Our Fathers; Jesus Is A Way Maker; What Child Is This; No Not One; Piano Medley (James "Big Lew" Garrison, Roy McNeal, Ed Hill, Jay Simmons, Dave Rogers on Close To The Master and After Awhile, Joe Moscheo).