Jack Toney began his long career singing with a group called John Hull And The Joymakers. In 1962, he joined the Prophets to sing lead between Ed Hill's baritone and Big Lew Garrison's tenor vocals. The following year, he joined the Dixie Echoes, but his tenure there was also short-lived. When Hovie Lister came calling later in 1963, Toney joined the Statesmen, replacing Jake Hess who had left to form his own group, the Imperials. Toney sang with the Statesmen until 1966 when he was replaced by Roy McNeal. A year later, Toney was back with the Statesmen until 1968.

In 1970, Toney sang lead with Rosie Rozell And The Searchers. He also sang with the Southmen Quartet when the group was formed in 1974.

Toney returned to the Statesmen briefly in 1979, again succeeding Jake Hess. Buddy Burton replaced Toney before the end of 1979. Toney next surfaced with the Gadsden Ambassadors.

Meanwhile, the Statesmen disbanded in 1981 when Hovie and J D Sumner formed the Masters V with Jake Hess, James Blackwood and Rosie Rozell. After Hess left the Masters V in 1986, Toney took over where Hess had left off once again. Toney continued singing with the Masters V as the group name transitioned to JD Sumner And The Stamps Quartet in 1988, and he remained their lead singer until 1990.

After the Stamps, Toney reunited with Rosie Rozell in a group billed at The Legends. Buddy Burton, who had replaced Toney with the Statesmen in 1979, was the baritone singer and Singing News columnist Roy Pauley completed the quartet singing bass.

Meanwhile, Hovie Lister had formed a new version of the Statesmen in 1992 with Jake Hess singing lead. In 1993, for the fourth time in his career, Jack Toney replaced Jake Hess. Toney was the dependable fixture at the lead position for the final eight years of the Statesmen. The group name was retired in 2001 upon Hovie Lister's death, but the remaining group members continued singing together for a short time billed as the Happy Rhythm Quartet.

Toney was frequently featured on the Gaither Homecoming Tour, the Grand Ole Gospel Reunion and other events until his death in 2004. He was also known as a gifted songwriter. 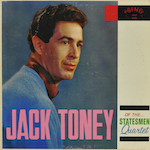 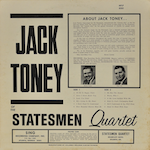 hi-res (Back Cover)
1966 Jack Toney of the Statesmen Quartet (Sing Records/MFLP 8080): I’ll Be So Happy There; Sorry I Never Knew You; Lord, I’ve Tried; He’s Living In My Heart; I Don’t Need To Understand; How Beautiful Heaven Must Be; He Has The Answer; Worry, Who I; Is My Lord Satisfied With Me; Hold To God’s Unchanging Hand; He’ll Understand And Say Well Done; Hand In Hand With Jesus.

1990 Requested Songs (Custom Records): O What A Savior; Beulah Land; My Tribute; Remember Me; Beyond The Gates; It Is Well With My Soul; The Shadow Of His Love; One Day At A Time; Sweet Sweet Spirit.

I Will Rise Up From My Grave
Some Dawning