Ben Speer sang with the Speer Family, recording more than 75 albums with them before retiring officially in 1993. After 1993, he still made occasional appearances with the group at special events. Speer also sang with the Homeland Quartet. He owned Ben Speer Music and relaunched the Stamps Baxter School Of Music in 1988. Speer was the musical director for most of the Gaither Homecoming Series videos, and occasionally filled in as lead singer for the Old Friends Quartet. 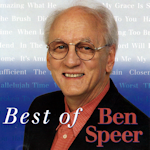 hi-res
1998 Best Of Ben Speer (Homeland Records): In The Midst Of It All; My Lord Will Lead Me Home; It's Amazing What He Saw In Me; My Grace Is Sufficient; The Brush; Didn't It Rain; Closer To You; Hallelujah; When Life Is At It's Worst; Things Too Broken To Mend.